It’s when I start writing down things that I realized how much of the analysis I do have been internalized. What took a fraction of a second for me to realize actually takes a long time to type out in plain English and present with graphs.

Today is about the most recent TA. Since that is probably the most pressing matter on your mind. Short term, what’s coming this week type of things. I have some long term debt analysis and the current profit analysis from my conservative straddle to come in next weeks’ time frame. Excuse me for the lack of anything as I focus 3 days per week on Canadian Real Estate as I am making quite a few large moves. 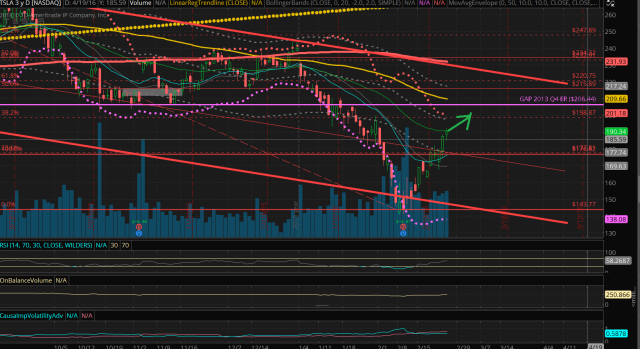 TSLA is currently in a general downtrend channel that began in July 20 2015. If you draw the top channel using the high of the day for 7/20, 9/25 and 12/30, you will get the channel. The lower channel is established with the use of the low of the day on 8/24. As you can see, the reversal happened around the price point of the lower channel. The id channel is established by taking out the extreme price swing of 8/24 and use the lowers candle of the rest of the trend. So you can say that the lower bound represent potential extreme move. The mid channel is the bearish case and the top channel is potential resistance.

Barring any macro shock, I believe the coming week will see a mean reversion as we move away from oversold conditions. $198.7 is one of the fib retracement levels that will present slight resistance while the $206.44 gap made in 2013 Q4 will present a higher than normal resistance. My personal guess is that the stock price will reach the $206.44 resistance when the 100 day moving average (thick yellow line in the graph) actually meets $206.44 level (Thick purple horizontal line).

Keeping this in mind, if you look at short term volatility, at 0.504, you’ll realize that this is smaller than the usual volatility while the actual risk for a upward rebound is greater than normal. This, in my opinion is due to computer algorithms not accounting for the March 31 Model 3 reveal volatility because it can’t read like human. The other reason is the fact that volatility to the downside seems to affect the premium calculation more than volatility to the upside. I remember something like that when I spent time to actually derive the Black-Scholes algorithm, can’t remember the details though.

So with the two in mind, $200 is again a very attractive price point to initiate a straddle strategy. However this time, I would go for a shorter term straddle instead of the longer term conservative straddle like last time. If you look at the volatility graph in the TA pic, you understand that long term volatility have now crossed above short term volatility.

You can discount any Macro news from China now. While researching Real Estate movements in Vancouver, I confirmed that the Chinese is selling things in China in order to move money out to other places. The first place where this is manifesting is in Real Estate prices of several targeted cities. The Chinese have an inherent distrust of the stock market, so the trickle down will not move to the actual stock market until the people who sold their houses to Chinese investors begin moving their money into the stock market. Seeing how slow Real Estate transactions are, I’d guesstimate next year. The detail of this research will be presented once I have finalized all my real estate moves.

So if China is not going to affect us, I believe the most important Macro events are Feds, Syria and Europe. Oil is moving to the bankruptcy and consolidation phase now. Hopefully within 1 year or two, the bankruptcy will subside and we will finally see a rebound. So I doubt oil is going to affect us much more. The Syrian conflict is interesting in that if it were to happen, oil price should shoot up and it will happen without USA’s involvement. The current feeling I get from most people in the western world is that they don’t want to get in between the conflict of two arab nations and Saudi Arabia cannot beat Russia.