You can basically just read the summary to know what I now know. The rest are analyst jargon, from a non-professional one at that. To download the final data: CDN real estate 2

Note: I stopped adding on to the research and improving the details before I consider the report complete because it became obvious that we are not at the point of a sbubble burst yet. In the next couple of months, you will hear some report in main stream media about 20% increase year-over-year for November and December housing. Keep in mind that these are high because last year’s oct-dec period was abysmal for housing.

The biggest concern for the Canadian market right now is the doubling of consumer and mortgage credit within the past ten years with half of the increase occurring between 2007 and 2009. That is about $300 billion of mortgage credit and $100 billion of consumer credit. To put that in perspective, every household is $21,428 more in mortgage debt than we were in 2007. The consumer credit increase is still linear as opposed to the exponential growth in mortgage credit so I am less worried about that. Although I can’t reach any conclusion until I get some data for 2009 when the bank of Canada lowered the rate to 0.25%.

To determine whether or not there is a bubble. I use the “average house price must be less than 5x after tax income” as a barometer, 7x if considering pre-tax income. The healthiest province is Alberta.Â  Their housing prices still have a while to go before catching up with the income increase from oil. For Montreal, the housing prices are about 10% away from a bubble. Vancouver is already there and Ontario (mainly Ottawa and Toronto) is about 3% from bubbling. Of course, we will never get a bubble if the median income increases along side house prices. With the recession in effect, I doubt anybody saw a raise in the past 2 years.

I estimate that we need at least one more year of 1o% price growth before the need to worry. Therefore, I will not sell my condo.

This is what happened to the US before the housing bubble burst. 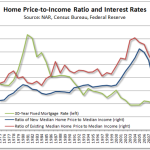 For Canada, it is actually quite frustrating to try to compile data like this. The problem lies in getting my hands on the data because our government don’t spend as much of their resources in polling people about the state of their wealth. I ended up having to scrape numbers from here and there as well as estimating them based on past data. In truth, we may never know what state our economy is in until the next census. Actually, the average Joe will not know until the next census because you’ll have to pay $3000 for the data sets to CANSIM if you do want to get your paw on the data.

Being poor and having no sponsor who would pay for this research, I opted to estimate instead.

Here are all the data I used and their sources. Hopefully I can just go to the same sources next year for the updated data.